Thermopot is an electric kettle with a heat-saving housing and a pump for supplying water and the function of maintaining a set temperature. That is, it is a combined household appliance that not only boils water, but also maintains its temperature at a given level. It is convenient. But it happens that the device fails. In this case, you will have to either contact a repair shop, or figure out how to repair the thermostat yourself.

Before starting the repair of the thermopot, it is important to know its arrangement in order to understand which part of the unit has failed.

So, the function of thermopot is to heat/boil water and maintain its temperature. To reduce the cost of maintaining the temperature, the case is made with insulation. True, it is not vacuum, as in good modern thermoses, but air. So the losses are still greater than in a thermos. But this device is convenient where hot water is often needed.

You can also find such names as a heated thermos, an electric thermos, a thermos kettle, a kettle with temperature support, a thermal kettle. 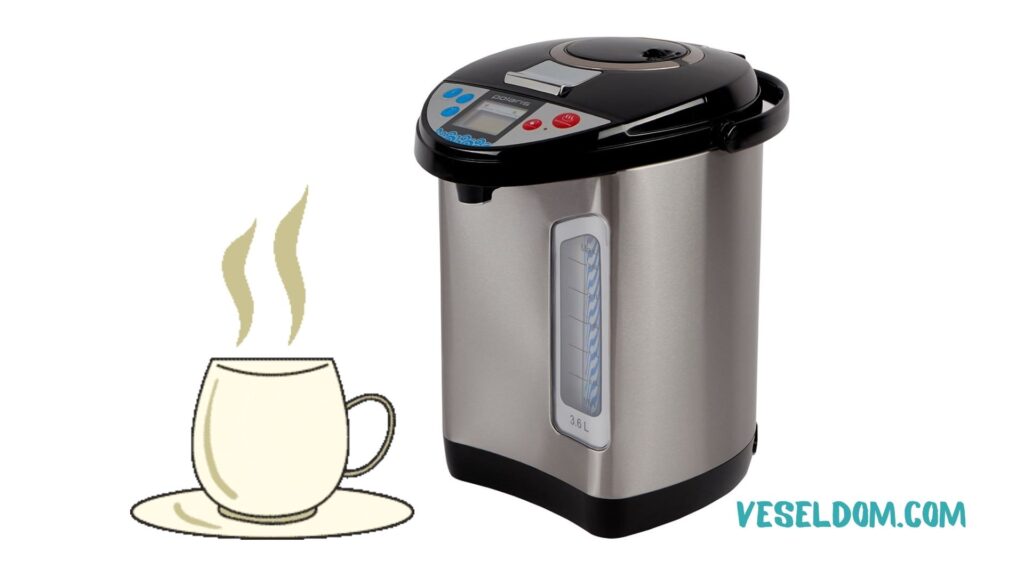 There are domestic thermopots of 2-6 liters. There are also those with a larger water capacity, but they are usually used already in cafes, restaurants, standing in offices, etc. To reduce costs for maintaining water temperature, the housing has two walls with an air gap. So, even the two-liter version has quite large dimensions. Holding and turning it over to pour water is quite inconvenient. Therefore, thermopots are equipped with pumps for supplying hot water.

The pump can be electric or mechanical. The temperature regulator is stepped or smooth. There are also models with electronic control (buttons or touch panel). In this case, there may be a remote control.

Repairing a thermopot is more difficult than restoring the functionality of an ordinary electric kettle. In addition to the heating element and the power button, there is a device for controlling the temperature of the water in the tank. It turns on the heating and when the set level is reached, it turns off the heating element. This part works from the 220 network.

According to the idea, one heating element can boil water and maintain the temperature. But, if the heater is of small capacity, it will take a long time to heat the water. And if it is large, there will be a large consumption of electricity. Therefore, they usually put a double TEN. The first is used for heating, the second – for temperature maintenance.

In addition, there is a pump that pumps water from the tank. If there is an electric pump, it is usually a low-power one, with a 12 or 24 V DC power supply. So, there is also a voltage converter and it can be the reason for the breakdown of the thermopot.

As you can see, the thermopot is more complex in design than the kettle and its repair is more difficult. However, in most cases, you can restore its performance on your own.

How to disassemble a thermopot

Any repair begins with the fact that you need to get to the “stuffing”, which fails.

Importantly! We recommend photographing each stage of thermopot disassembly, so that you can then assemble it in the reverse direction based on the photo.

First of all, remove the top button. It is fastened on latches, so some effort is required. But the latches are made of thin plastic, so you have to be careful not to break them.

Next, we turn the thermopot over and determine how the bottom is attached. More often, the bottom is held on screws hidden by a ring. This ring is held on by plastic latches. Grab it with something flat (screwdriver) and remove. The screws are visible under the ring. We also unscrew them. Now you can remove the bottom.

The main breakdowns are related to the heating element

Thermopots have two types of breakdowns that are common:

In both cases, the heating element is to blame. The fact is that in thermopot it consists of two parts. The first is turned on when you need to boil water, the second – to maintain the set temperature. Both parts are soldered in the same housing, so when one of them comes out, the entire element has to be changed.

The heating element for thermal sweat has an unusual appearance – it is a metal ring made of a strip of metal several centimeters wide with three outputs in ceramic insulators. This type of heaters is called tape. There are them for different models with different power. There are also different diameters. All data is indicated on the details.

Another feature: the heating element for thermal sweat is doubled. Two different heaters of different power are soldered in one housing. In general, the power can be from 500-600 W to several kilowatts; diameter from 140-150 mm to 160-170 mm. The diameter is indicated with a difference, because it can be adjusted with the help of a tie.

TEN’s ring is easy to find. As soon as you remove the bottom, looking at the case from the side, you can see the tape heater. His conclusions are also clearly visible. They are brought to the contact area, where they are fixed with nuts. Before removing the heating element, sign the conclusions or take a photo. It will be necessary to collect exactly as it was, and nothing can be mixed up.

To be sure that the heater is to blame for the breakdown, you need to check it before removing it. Take an ordinary multimeter and check the resistance of both heating elements in the resistance measurement mode. For this, one of the probes touches the common terminal (it is one, on one side). The second probe first touches the first lead, then the second.

If any heating element has burned out, the device will show a break. Then everything is simple. We loosen the nuts on the ties until the heater ring can be removed. Everything is installed in the reverse order. This part is easy, so no problem.

How to do without a new Ten

The option of replacing the heating element is logical and understandable. But in terms of cost, a new heating element for thermopot is equal to half the price of a new device. There are options for restoring the heater without replacing it. But this is for those who agree to use non-standard solutions.

Burned out TEN is a heating element that broke off somewhere. One of the options to restore its performance is to disassemble the housing of the heating element and connect (solder, twist, etc.) the broken wiring. Then, if possible, fold the heater body and you can put the restored heating element in place.

The pump does not pump water

Often there is a problem – the thermopot stops supplying hot water. Pouring it with a ladle is an unpleasant prospect. And without water supply, the device turns into a regular electric kettle with improved thermal insulation.

Thermopot repair depends on the type of damage. If the pump does not turn on, there are two options – problems with the power supply or the motor has burned out. If it buzzes, but the water does not run or runs with a small pressure, the pump may be clogged or the impeller may be faulty.

Oddly enough, the thermopot pump may not work due to a blown heating coil. The pump is fed through this part of the heater. That is, if the device does not pump water, first of all we check whether the temperature maintenance heater has burned out.

If there are problems with the heating element, after replacing it, the pump will work. If replacing the heater is not an option, you can “build in” a separate pump power supply branch. You can find a charger with the appropriate parameters (most likely you need a constant voltage of 12 V), disassemble the case, and place the bridge and fuse somewhere in the case. It will be necessary to resolder both the input and the voltage supply to the pump.

If the pump works, but does not pump water

If the pump motor hums, but no water is supplied, it may simply be clogged. In this case, it is necessary to disassemble the entire water supply path, rinse it from scale. That should help. Step-by-step actions:

Cleaning or replacing the thermopot pump is not as expensive as replacing the heater. So, this type of repair work is completely justified.

Does not turn on

Another of the breakdowns is that the thermostat does not turn on. There are quite a lot of reasons, you will have to go through everything in order.

Another possible reason why the thermostat does not turn on is the lack of contact. Bad soldering sooner or later manifests itself as either complete or partial failure. The way out is to crimp the removable contacts, solder suspicious solder joints.

If the thermopot overheats the water or constantly boils, and not just heats up from time to time. If the heating does not turn on. All these breakdowns have two causes – the thermal fuse (which is responsible for overheating) or in the control board (if the model is more complex).

The thermal sweat overheating sensor in more expensive models is made of a thermal relay. A thermistor with a certain trigger threshold is soldered into the ceramic case. Install the sensor so that it closely touches the case. Power to the heaters is supplied through the contacts of this device. When the case heats up above the trigger threshold, it will trigger and open the contacts.

When cooling below a certain value (the second of the parameters), the thermal relay closes the circuit again, the heater starts heating the water. So, all of the above thermopot breakdowns are usually associated with the thermal sensor. Repair of the thermostat in this case is replacement of the sensor.

As already said, it is located either on the bottom or on the body. It looks like a black or white round (usually) “thing” on a metal plate. The sensor is simply disconnected – you need to press lightly on the central petal of the contact.

You can check it if you wish. We take a multimeter, set it to resistance measurement mode. We touch the probes of the sensor terminals. There should be a resistance of 0 ohms, that is, the contacts are closed. To check the performance of the thermistor, it is necessary to heat it, for example, with a lighter. When heated, the contacts open, the resistance disappears. If it does not work out, then repair is required. We take a similar new one, put it in its former place in the case and connect the contacts.

Note that you need to set the same one, otherwise the device may not work properly. For example, KSD 201 is a thermal switch with self-return, and KSD 302S refers to devices with forced inclusion.

What else can be

If the sensor has been replaced and the fault remains, check that the sensor is installed correctly. The back side should be tightly pressed against the body. Sometimes there is an air layer that distorts the real temperature, so the water in the thermal sweat is overheated.

The more complex models have a control board (in the simpler ones, there are only two LEDs – for turning on the power supply and the heating element). When repairing, carefully look at the quality of soldering. Cold (turbid or cracked solder), wires moving under the tin layer are all possible causes of breakdowns.

It is also worth checking the control buttons. They can “stick”, constantly giving the signal of forced boiling. Or, on the contrary, when the button is pressed, there is no closing of the contacts. You can disassemble the button, but you will have to tinker.

How to repair thermopot (thermos kettle)