Have you got ants at home? Most often, it is recommended to buy boric acid for the removal of insects. You bought it, but you don’t know how to use it properly? It’s not scary! In this article, we have collected recipes for the most effective traps based on this poison. Let’s figure out how to get rid of ants with boric acid, how exactly it removes insects, and whether its use is safe for the residents of the house.

To begin with, it is worth understanding how boric acid works. After entering the insect’s body, it is absorbed in its intestines after a short time and enters the ant’s peripheral nerves from there. There, this agent causes malfunctions in the nervous system, which later provoke paralysis and death.

Important: the effect of the poison extends not only to those insects that ate it, but also to those of its relatives that eat the remains of the poisoned ant. That is why it is believed that boric acid is effective against ants even when a person does not know where in his home the colony of these pests has hidden.

A small amount of this agent is enough to kill ants. One pack of acid is enough to clean the entire house from pests.

Is it safe for people?

This ant poison is considered safe for humans. Moreover, it does not harm most pets. In low concentration, this agent is dangerous only for cockroaches, ants and some other insect pests.

Important: even a whole powder of boric acid from domestic ants, accidentally consumed by a person in food, will not cause severe poisoning, in such cases only minor allergic reactions appear. In the concentration in which this agent can really harm the health of a child or an adult, it is simply not found on the free market. 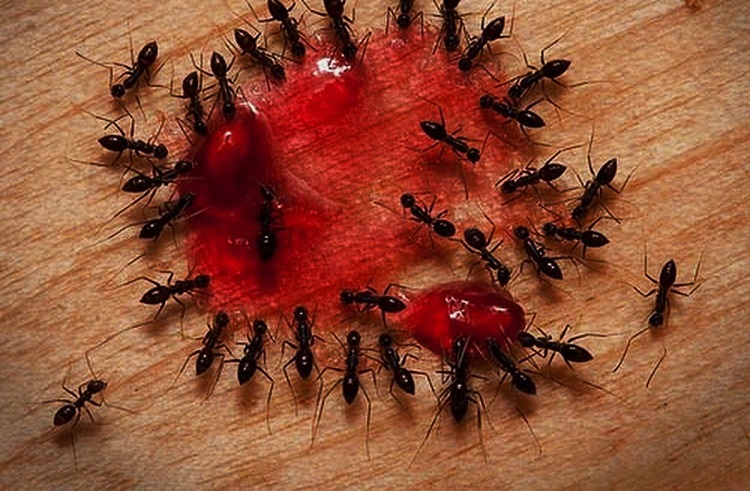 The easiest way to use against household pests is in the form of a powder. It is used as follows: a significant amount of boric acid powder is sprinkled near the places where ants gather, as well as in the corners of the apartment, near plinths, sinks, near ventilation ducts (since it is through them that insects most often get into the apartment).

In order to increase the chances of acid damage to the entire colony, it is recommended to mix this agent with sugar, which the pests will readily eat.

How to dilute such poison ? You will need to pound the sugar in a mortar into a fine powder, and then mix it with the acid.

When using this tool, the fight against ants goes like this: insects eat part of the scattered powder, and also bring some of it on their paws to their colony. After one pest dies, its relatives eat the remains of the poison and also die. Thanks to this, it is possible to destroy even a fairly large colony of pests in just a few days.

Important: this method is best used if you do not know exactly where the ant colony is in the room. It allows you to process the entire apartment, as well as prevent pests from neighboring houses from entering the house. Complete destruction of pests takes two weeks.

How to get rid of ants in a few days? Baits with egg-based acid give a good result in the fight against insects in the house. They are used in the following way:

This recipe is considered even more effective than boric acid and sugar. Ant balls are very quickly taken to their nest, due to which their entire colony dies in just a few days.

Important: when preparing this recipe, it is extremely important to follow the proportions of the ingredients. Otherwise, the worker may die from it, and the bait itself will not get into the ant nest.

Here is another option for combining boric acid with an egg, but this time a boiled one:

Honey and boric acid are also very effective in pest control. Prepare this bait as follows:

Important: in order for such a bait to be more effective, you should limit the access of insects to any other products. It is advisable to temporarily remove all food from the apartment and leave it for a few days. Then the ants will definitely eat the bait and die.

This is a more advanced version of the honey bait, which will be effective even if you do not know exactly where the insect nest is located in the apartment. How to cook? To begin with, the following ingredients are taken:

You will need to mix all these components, roll out a thick dough from them, and then stick bait balls from this dough. How to use them? These balls will need to be placed near the baseboards, ventilation, and also near the garbage can. You need to update them once every few days – this ensures that honey and acid will get into the nest of ants and give the desired effect in the fight against them.

Important: be sure to follow the proportion of components in this recipe. Otherwise, it will be ineffective.

Balls of boric acid with minced meat are also very effective against such pests. They are prepared simply:

The principle of action of this poison is the same as that of other baits.

Important: Do not use this recipe if you have pets that eat meat. They can eat the bait before the ants.

How to poison ants with boric acid quickly and effectively? To do this, you need to follow some rules for working with this poison. They provide for:

If you follow these recommendations, boric acid will get rid of red ants in the apartment quite quickly. The main thing is not to stop using this tool in advance and to ensure that pests from neighbors do not enter the house.

How to get rid of ants with boric acid